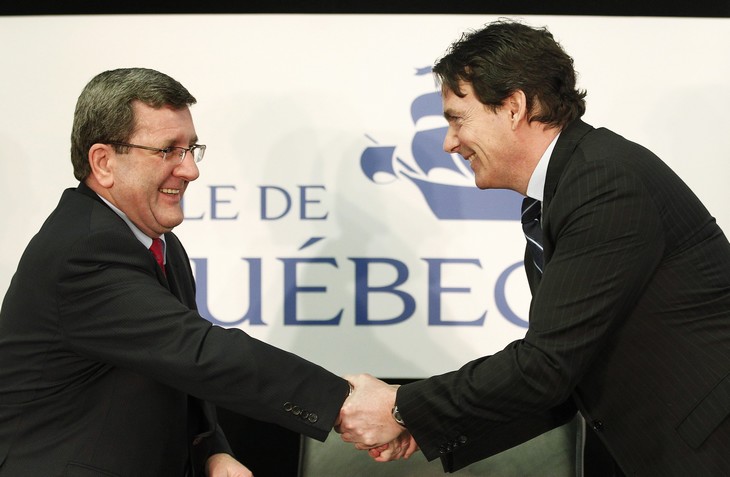 In a similar announcement to that of Farmers Field acquiring the naming rights to the proposed stadium in downtown LA in February 2010, Canadian communications company Quebecor has been confirmed as the naming rights sponsor to the, as yet, unbuilt and unmanned NHL arena in Quebec City.

Though the city and the province of Quebec will pool funds to put up the US$400 million required to build the 18,000 seat arena, Quebecor, through its cable TV and internet service provider subsidiary Vidéotron, will contribute US$33 million over the length of the 25-year long contract, a sum that will rise to US$63 million if the city manages to attract an NHL franchise.

Additionally the Quebec-based company will pay a further US$3.15 million to US$5 million sum annually for the rights to manage the multipurpose arena, which is expected to draw large-scale shows with or without a permanent ice hockey team. As such, as much as 15 per cent of the stadium's operational profits will be redirected to the city.

"We have confidence in the dynamic nature of the national capital, and its population. There is a lot happening here, projects are being realised, and we're happy to be a part of it," said Quebecor chief executive, Pierre Karl Peladeau. "This project is very dear to me and I will put all my heart and all my energy into this."

Regarding the future possibility of attracting an NHL franchise, Peladeau added, "[NHL] commissioner Gary Bettman knows he can now have a team in Quebec City. We were saying last week that Winnipeg was in a better position to get a concession from the league, but that's not true today. Quebec and Winnipeg are even.”

Overall Quebecor will invest between US$110 million and US$200 million over the entire length of the contract.

The stadium itself is due for completion in 2015.