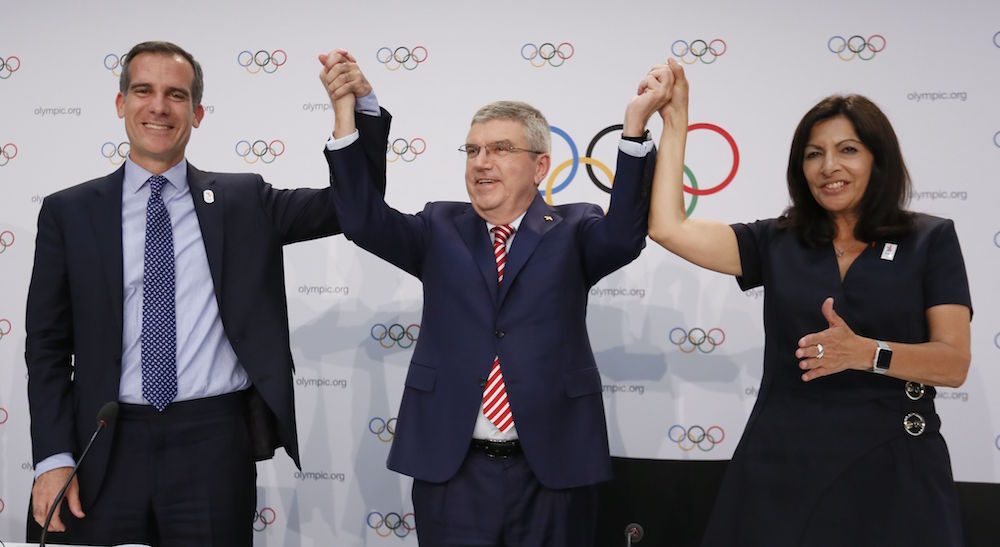 Los Angeles is poised to be announced as the host city for the 2028 Olympic and Paralympic Games, according to a report by the Los Angeles Times.

The Californian city has reportedly struck a deal that will see it host the Games in 2028 instead of 2024, the edition it had been bidding for alongside Paris, which is now set to be awarded that event in seven years’ time.

The International Olympic Committee (IOC) is expected to confirm the arrangement later on Monday after its members voted in July to award both Games at the same time when they meet in Lima, Peru on 13th September.

Monday's announcement, which has been rumoured for several months, is likely to be rubber-stamped at the same meeting.

The two cities are the only remaining candidates for 2024 after Budapest, Hamburg and Rome withdrew in the face of a collapse in political or public support. LA was itself a late replacement for Boston as the United States Olympics Committee's (USOC) preferred candidate, after the latter also pulled out.

Since news broke that a dual award would take place, officials from the LA and Paris bid teams have been in negotiations with IOC representatives in an effort to settle on a “tripartite agreement” that would dictate which city goes first.

Both Paris and LA have previously stated their insistence that they are only considering 2024, yet the French capital has long been considered a slight favourite to take the earlier slot, which falls on the centenary of its most recent Games.

It is understood that LA officials have been seeking certain financial concessions for stepping aside and waiting until 2028, such as additional IOC funding to cover operational costs and extra support for youth programmes in the city.

While LA has much of its infrastructure for hosting the Games already in place, the city’s bid team has been keen to secure some form of indemnity against the greater financial uncertainty of planning for an event 11 years into the future. Other expenses, such as the redrawing of contracts, consultancy fees, and even the revaluation of branding and marketing concepts, are likely to have also factored into the discussions.

Monday's LA Times report, which cites 'a source close to the negotiation', comes after LA mayor Eric Garcetti effectively conceded the race for 2024 to Paris last week. Speaking at a BuzzFeed event on Wednesday, he said IOC negotiators had made hosting the later Games “financially so attractive, we'd be stupid not to take 2028.”

Though LA may not be getting its preferred 2024 slot, Garcetti is still framing the arrangement as a cause for celebration. “We have won,” said the American, who previously cited his close friendship with his counterpart in the French capital, Anne Hidalgo, as reason to be optimistic that a deal would be reached.