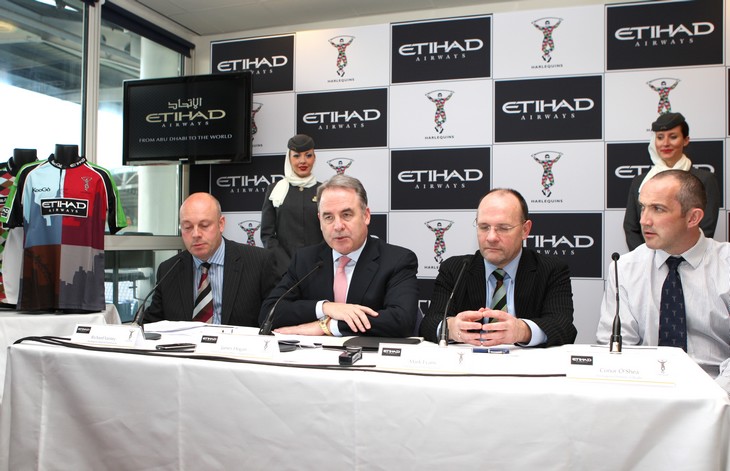 Etihad Airways has extended its long-term sponsorship of English Premiership  union side side Harlequins for an additional three-year period.

Under terms of the renewed deal, estimated to be worth US$800,000 annually, the Abu Dhabi-based airline will continue to have its logo featured on the front of the club's playing shirts.

Additionally the east stand of Harlequins' home ground, the 14,816 capacity Twickenham Stoop, will continue to be known as the Etihad Stand.

A further aspect of the multi-year deal will see Harlequins players continue to visit the Emirate for training camps during the off-season.

"We are delighted to further extend the sponsorship deal with Harlequins – a partnership that has exceeded expectations and provided both parties with fantastic brand exposure on a global level," said James Hogan, Etihad Airways chief executive. "We look forward to hosting more community events in the coming three years and welcoming Quins playing and coaching staff back to Etihad's home-base of Abu Dhabi."

Mark Evans, Harlequins chief executive, added, "Our relationship has been an excellent one for the last four years and we are delighted to have secured the airline's support going forward for the next three seasons. I leave the club in very good hands and I know both parties will both benefit hugely from this ongoing partnership.

"Etihad is an ideal sponsor for Quins and we are really looking forward to working with the team to ensure that both parties drive further value from the relationship and enjoy each other's successes."

In January 2011 the London-based rugby union side, with the backing of Etihad Airways, took part in an LV=Cup clash against local rivals London Wasps in Abu Dhabi marking the first UK domestic competitive rugby fixture to be played overseas.