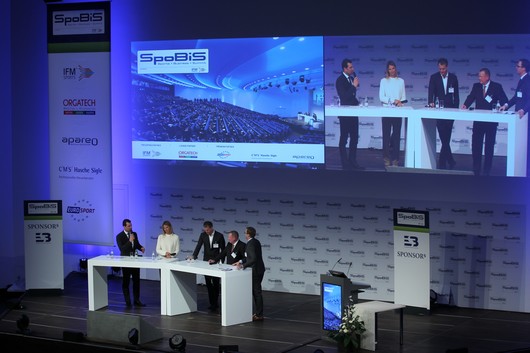 SpoBiS 2013: controversial discussion on the liberalisation of sports betting and what German society stands to gain from this

Other topics: why it’s worth investing in the tennis venue of Düsseldorf – former tennis pro Rainer Schüttler shares his views

Hamburg, 29 January 2013 – The Sports Business Summit (SpoBiS) will take place in Düsseldorf on 18-19 February, 2013. Some 1,500 participants will once again meet at the CCD Congress Center Düsseldorf for Europe’s largest sports business conference. As in previous years, the event will also be attended by 130 top national and international speakers.

The “Sport and politics” forum on the first conference day (18 February, 10:00-11:35) will be of particular interest. Hardly any other issue is currently causing as much discord within the German sports business industry as the new German gambling regulations (Glücksspielstaatsvertrag) and their implementation. Indeed, only last week did Schleswig-Holstein sign the treaty, which has actually been in force since the summer, thus heralding the end of the state’s special sports betting tax regime. It was previously announced that Schleswig-Holstein had granted further licences for sports gambling and online casino games. A total of 22 companies now hold a licence for sports gambling and 13 hold one for online casino games. These are valid for six years – and that despite signing of the German gambling regulations, which do not provide for the granting of any casino licences. A lively debate can therefore be expected at SpoBiS 2013. Jörg Wacker (Director, Bwin Germany), Theo Gosser (CEO, WestLotto), Hans-Jörn Arp (Member of the Schleswig-Holstein Landtag (CDU)) and Holger Blask (Chief Legal Advisor, DFL) are set to participate in this discussion on “Liberalising sports betting: And what German society stands to gain”.

In the “Sport and politics” forum, Jan Pommer (Vice Spokesman, Initiative Profisport Deutschland & Managing Director, Beko Basketball Bundesliga (BBL)), Bernhard Schwank (Director Competitive Sports, DOSB) and Reinhard Grindel (Member of the Bundestag (CDU)) will look to the future and consider the sports policy challenges in the wake of the parliamentary elections coming up in September 2013.

The question of the current perception of Germany as a sports venue from an international perspective will be examined in the “Sports venue marketing” forum (18 February, 13:15-15:00). Take tennis, for example: in May 2013, the Power Horse Open will be held at the Rochusclub Düsseldorf for the first time. The ATP World Tour 250 series will replace the World Team Cup previously held in Düsseldorf. The organisers hope to arouse greater interest among potential sponsors with this new format. At SpoBiS 2013, Rainer Schüttler (former tennis pro and licence holder, Power Horse Cup) and Dietloff von Arnim (Tournament Director, Power Horse Cup) will explain just why it is worth investing in the tennis venue of Düsseldorf.

Erwin Langer will showcase a further traditional event at the SpoBiS. The brother of German golfing legend, Bernhard Langer, and Managing Director of Langer Sport Marketing will speak on the Ryder Cup and hosting of the most prestigious golf tournament in the world at which America and Europe’s best golfers go head to head every two years. In 2011, Langer was involved in the German bid to host the 2018 Ryder Cup, which ultimately failed due to a lack of financial support from German politics and the state of the economy.

The full programme can be viewed online at www.spobis.com.