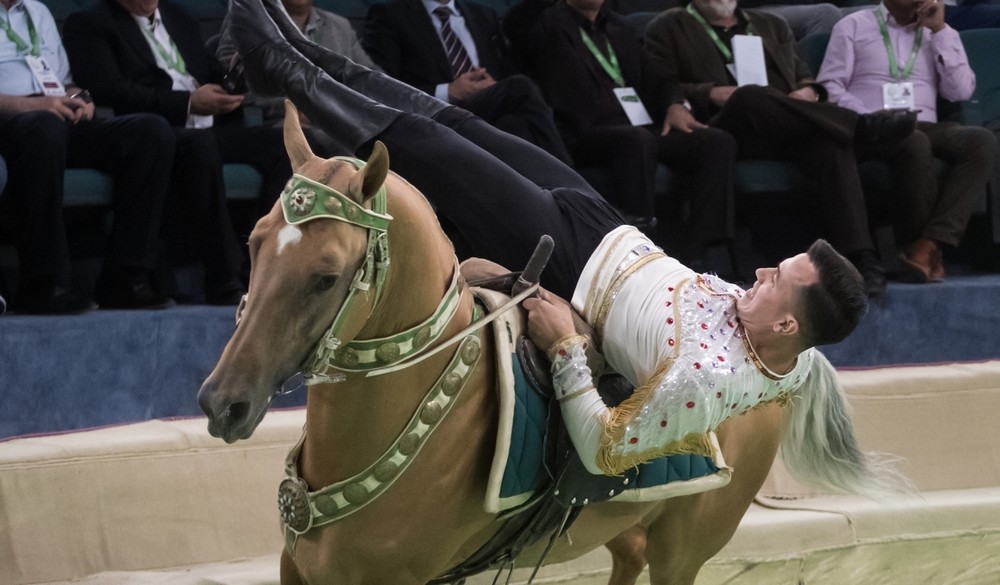 President Gurbanguly Berdimuhamedov led the '30 Days to Go' celebrations as Turkmenistan gears up to host the Ashgabat 2017 5th Asian Indoor and Marital Arts Games, the biggest multi-sport event ever held in Central Asia.

From inspecting some of the 400 different varieties of melon grown in the country to mark Turkmen Melon Day to attending a dinner with an Asian theme and then a concert featuring the British singer John Newman, President Berdimuhamedov enjoyed the celebrations that provided a wonderful insight into what we can expect from 17–27 September.

Earlier in the day, over 100 national and international media were taken on a tour of a number of attractions around the capital, Ashgabat, as the Executive Committee continues to put the final touches on the Games which will be attended by more than 6,000 athletes from 65 delegations from Asia and Oceania.

One of the highlights of the day-long event was an acrobatic show by a renowned horse-riding troupe called Galkynysh, which means renaissance in Turkmen. The men and women of the group performed daredevil feats while riding the country's famous Akhal-Teke horses in a circular hall at the International Equestrian Centre. Their skills on and sometimes off the horses received a huge ovation from the attending journalists.

They also got the chance to walk through the Old Nisa Fortress, a ruins which dates back to the 2nd century BC. It was declared a UNESCO World Heritage Site in 2007. The fortress, with its impressive 9m thick foundation in the shape of a pentagon, made it impossible for enemies to penetrate the former royal complex.

A dazzling fireworks display lit up the sky above Ashgabat to end the day's festivities after the '30 Days to Go' concert, where Newman performed some of his worldwide hits.

Saleh Dawoud Ahmad, a Jordanian journalist, said the day was first-class and looked forward to a time when Jordan could host such an event.

“It is impressive to see for myself just how ready Ashgabat actually is,” he said. “There may be 30 days to go but Ashgabat has been ready for a long time and I can’t wait to return in a few weeks to cover what I know will be a brilliant event.”

Asia's second biggest sporting event after the Asian Games will feature 21 sports played in 15 venues over 12 days of action.