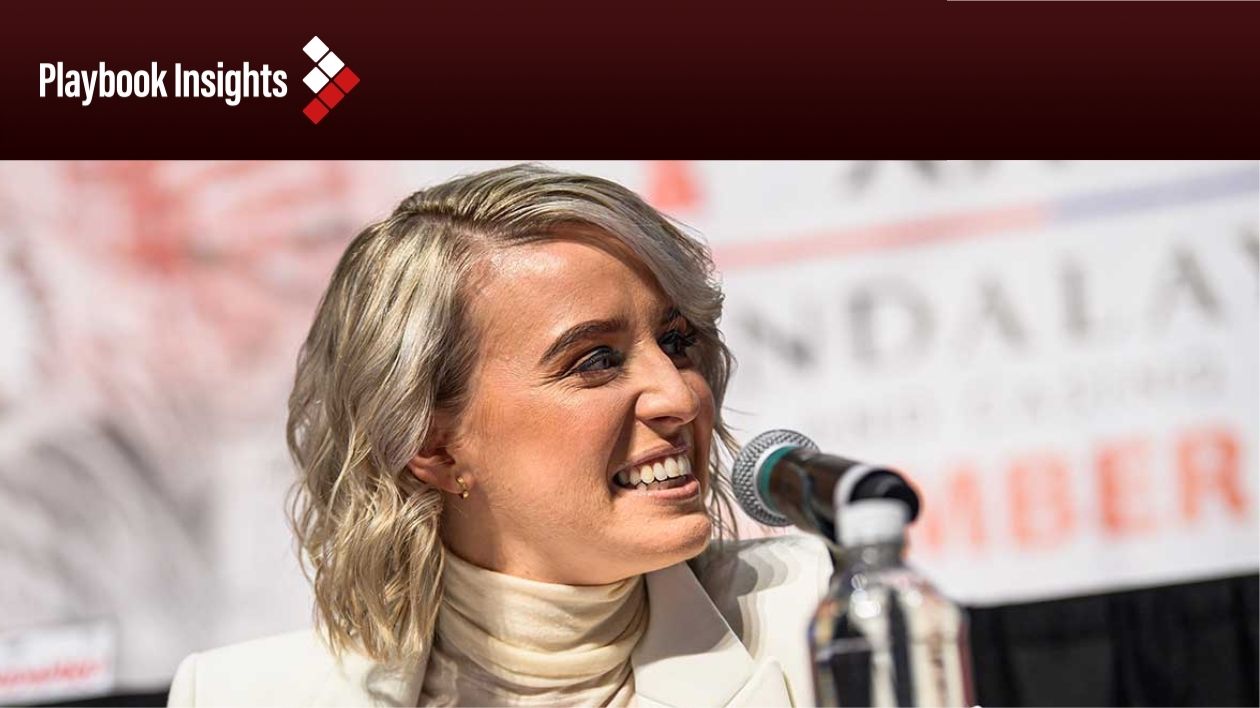 Our last Playbook Podcast focused on how to lead in an entrepreneurial environment. My guest was Emily Frazer, the hugely impressive managing director of Matchroom Multi Sport.

During the conversation Frazer explained how Matchroom’s entrepreneurial approach runs through the DNA of the entire business, and how she has developed her own leadership style to reflect that environment.

I’ve tried to pull out three things that I found particularly useful from our conversation – but I’d really recommend you take time to listen if you can. We all need to think a little more like an entrepreneur these days as we look to build our businesses back.

Cutting through (without betting the house)

Very few entrepreneurs start off life with a captive market. Many are building products or services customers don’t yet know they actually need. That’s not easy, because budgets are often necessarily tight when testing ideas where the probability of success is by no means guranteed.

So it is for Matchroom Multi Sport. Pool, fishing, gymnastics and tenpin bowling do not necessarily generate huge audiences organically, as Frazer admitted. “We are niche and don’t naturally draw in big crowds. So we have to make our events spectacular for a casual sports fan.”

Matchroom owns and manages its events end-to-end, which enables it to test and learn, constantly adding new touches to reinvent the sports the promoter is presenting to try to reach into new mainstream audiences.

That sounds expensive, right? Well, no. My favourite example from the podcast was the ‘double point buzzer’ – a UK£500 last-minute brainwave that Frazer’s team created to add a bit of emotion around to a new ‘double point’ wildcard concept in Matchroom’s ping pong event. It worked – both on TV and in the arena itself – to the extent the prop has now become a staple of Matchroom’s netball events as well.

Matchroom has used the same approach with the old school bats they use. This deliberately low tech move makes the rallies longer to watch, and creates clear differentiation from the Olympic form of the game. These kind of innovations have been key for Matchroom to reach new audiences for niche sports. Austerity can often be the mother of invention for entrepreneurial businesses, as it forces you to think differently.

As we know from film and entertainment industry, spend and impact are not always correlated. Early reality show Big Brother is a good example. Relative to most entertainment programming, the production cost of the content per hour was extremely low. Talent was unknown and so cheap, filming took place in a single location, often with remote cameras. Critically different content ideas in the shows themselves could be tested at will, because there was so much time to fill. Production company Endemol, just like Matchroom, could play with their format until it worked without betting the house.

Use people you trust to help you progress faster

You can get a sense from the buzzer story of the attitude which permeates Matchroom and the way in which Frazer has learned to lead. The pragmatic, no-nonsense attitude is so key in making things happen quickly. When hiring for Two Circles I used to look for people that I’d want to be on a soccer pitch with me at 2-0 down with 15 minutes to go, playing into a howling wind. In an entrepreneurial environment there’s just no role for anything else.

Frazer told a story about couriering Covid tests to labs herself in order to ensure an event continued when the courier company let her team down. That’s the mindset that’s needed in an entrepreneurial business – and it starts with the boss.

Frazer learned those ropes from Matchroom’s director of programming Katie Hearne, who has acted as a mentor for her for the 11 years she has been at Matchroom. When a business is taking off, having someone to offer honest, timely feedback can be so critical to learning quickly as you go.

For Frazer, one of the toughest areas to get her head around was balancing her own leadership style. “When I was growing in this role, you’re not sure how to deal with some situations because you’re either being too nice or you’re being a bitch. It’s really difficult, it takes a long time to learn.”

She’s now happy to pay it forward and help other women experiencing the same challenges break “through the glass ceiling together”.

In order to break through any glass ceiling you often need others to lend you few power tools. In my experience, timely feedback from someone you trust is the most powerful of those.

Leading an entrepreneurial business is a major test. If you need one thing, it’s belief – not only in your business, but also in yourself. As an entrepreneur, you’re often doing things for the first-time day after day, in particular if the business is growing quickly. A former boss of mine, Olympic gold medallist Adrian Moorhouse, shared his favourite quote with me from his training days: “If you follow in the footsteps of somebody, you’ll never overtake them.” But making your own path isn’t easy, particularly if you’re not completely sure where you’re heading.

When most people hit a level in business, imposter syndrome bites. I’ve had mild versions several times in my career, as has Frazer. She recommends having “a few words with yourself in the mirror”, often going with “you’re a badass bitch and you’ve got this”. They’re not exactly the words I use, but the sentiment is the same.  As Frazer says: “What’s the worst that can happen?”

I asked Frazer to sum up the conversation we’d had in ten words or less. She came straight back with: “Don’t give up on yourself.”

We all need some time looking into the mirror now and again to remind yourself of that. Hopefully the SportsPro Playbook series helps you feel like you’re not alone on the journey.

Whether you’re new to the SportsPro Playbook series, or becoming one of our very first regulars – welcome. The SportsPro Playbook is our new destination offering pragmatic advice on how to run a better business. From the all-new Playbook Podcast, the free-to-download CEO Playbook to our unique senior executive programme Playbook Labs, it’s all there for you.

The SportsPro Playbook is the place to go for agenda-free, pragmatic advice to understand how to navigate your organisation through change. Click here to read more of our library of articles and podcasts, and learn more about how our new Playbook Labs programme can help you lead your organisation to success in 2021 and beyond.