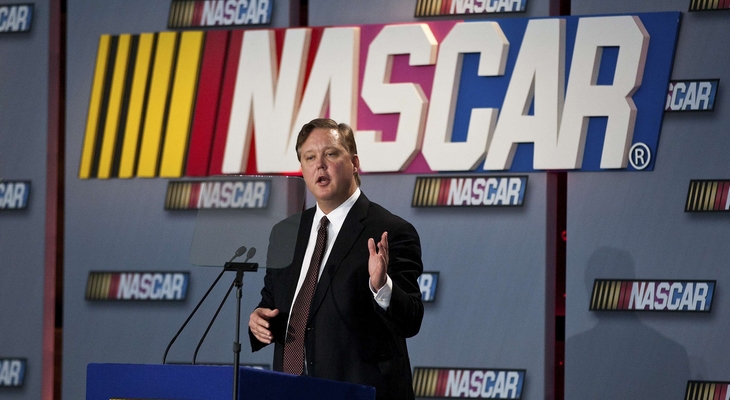 Nascar chief executive Brian France was in London this week to attend the Beyond Sport conference and discuss the sport’s environmental initiatives, all of which fall under the Nascar Green banner. The programme covers everything from the introduction of biofuels at the start of 2011 to the reclamation of old tyres to what Nascar claims to be sport’s largest recycling programme. France sat down with SportsPro to discuss the rationale behind Nascar Green and other key Nascar issues in 2012, namely the preparations of all-new cars in 2013 and progress on confirming its new US television rights deal.

What kind of resources have you utilised for your Nascar Green project?
We’ve added some personnel, we’ve also engaged with several third parties to evaluate directionally what we should be thinking about it. We’re adding resources. I spend time on it myself. It’s important and we’ll see where it all goes.

What’s the overarching Nascar position on this – do you feel you have a responsibility to effect social change?
The positioning of it is we need to be in step with what’s important to young people and everyone else, in terms of why the environment and doing the right things are important. And that means taking a lead in a lot of this, even if they are on a relative basis not going to make a big impact. The amount of fuel we use is not going to make a big impact but it’s an indication that biofuels can work in tough conditions, it’s an indication that it’s important to Nascar, our drivers and our teams. That educates some and rallies others so there are lots of good reasons to do the right thing.

“We need to be in step with what’s important to young people and everyone else, in terms of why the environment and doing the right things are important”

How important is communicating all this and be seen to be conveying the right message?
That’s the magic. We have not only a big fanbase that we can make a big impact with, a big TV audience, but also the biggest line-up of corporation to either integrate our programme in with theirs in some cases, or join theirs. We’ve got a lot of points of entry to grow our green initiatives.

We’re right in the thick of another season, what’s your assessment of Nascar as a business?
We’re still getting through the tough economy and it’s got worse of late. But we’re fine and we’ve had a number of new companies join us; we’ll always have a few that leave. One in five Fortune 500 companies market with us so we’re grateful for that. The car companies are healthy again and doing more with us – we were very worried about that a few years ago. We’ll have to keep doing things that are cost-conscious for our fans so they can take in as much Nascar as possible.

How important is the transition over the next few months and into next year with the new breed of cars for 2013, which more closely resemble what’s driven on the road?
It’s real important. It’s important for us to have rules packages that are attached to these new cars that will promote closer and more side-by-side racing. Those packages are going to be evolving but in the new car launch the public, our fans, think it’s a better race car to put on better racing. Of course it looks more like what a car manufacturer produces and that’s all a good thing. It’s important for us to get it right.

What kind of progress are you making towards signing a new US TV rights deal?
We’re making progress and having some more serious conversations around that. We’re going to be just fine in that area but I don’t know how it will all play out.

“I think it’s important for us to take advantage of the digital age in a way that gives us a chance to reach our fans, connect and communicate, in a much different way than has been possible in the past”

When you’re working on that contract what will be informing those discussions?
Obviously it’s packaging the digital portion of the rights to make sure that we give our broadcasting partners some digital capabilities to take advantage of their packages but at the same time making sure that we don’t grant certain rights that are going to be important for other reasons to us. All sports leagues are looking at that carefully – a lot of that is social media – and everything is moving so fast it may be hard to get it all perfect but I think we’ll be okay on that. We’ve got a lot of help and expertise on getting those rights lanes defined correctly.

In terms of your agenda over the next few months, what are your key areas of priority?
Innovation and getting the new car launched correctly is important. Making sure we’re doing everything we can for the fans who are either losing their job or they think they are or whatever else, to make it easier for them to come to a Nascar event. I think it’s important for us to take advantage of the digital age in a way that gives us a chance to reach our fans, connect and communicate, in a much different way than has been possible in the past. Those three things are right at the top of the list.