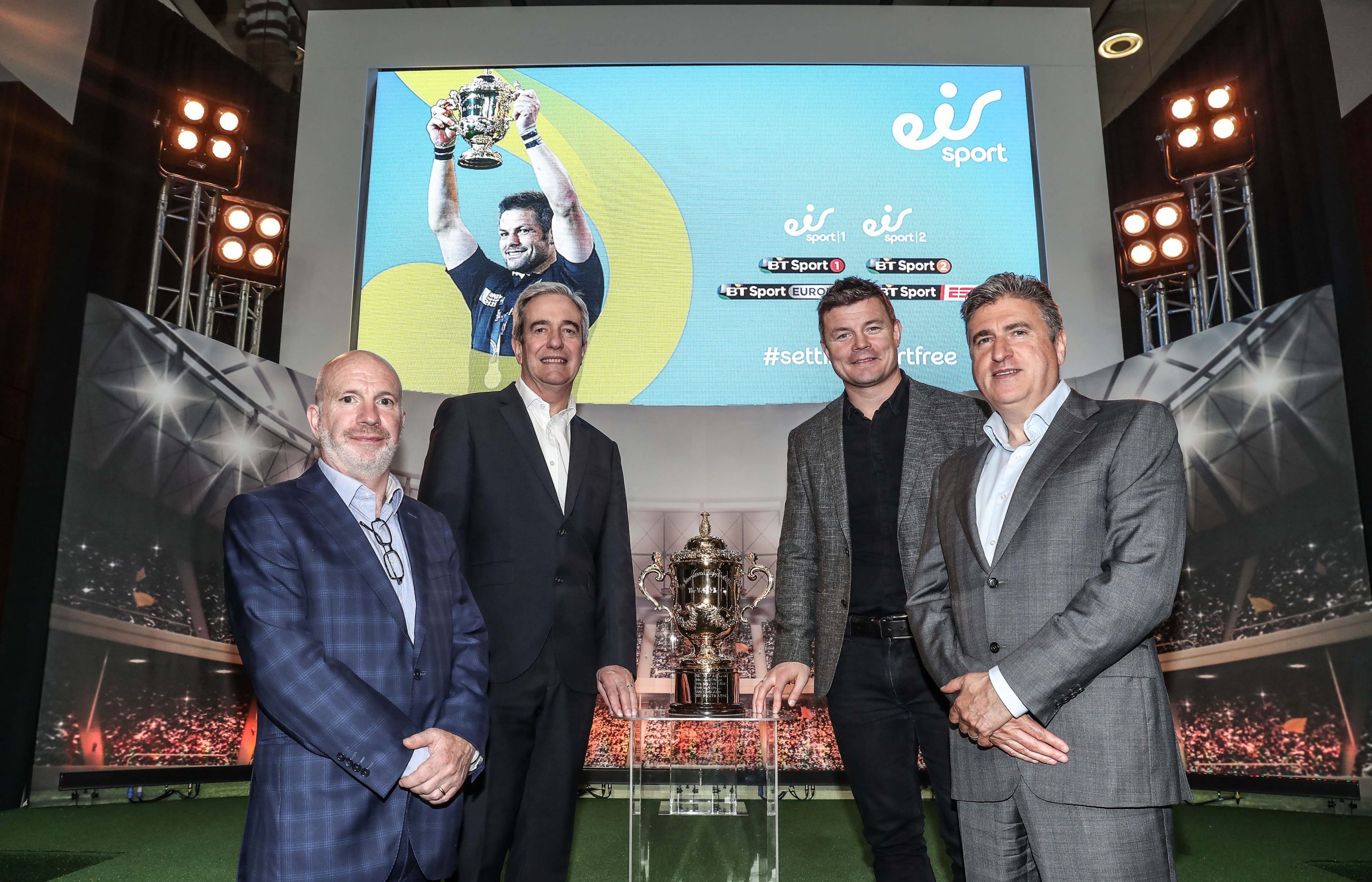 The Republic of Ireland is not one of Europe’s bigger TV nations, but this year it has provided one of the continent’s more significant sports broadcasting stories.

Founded in 1990, Setanta Sports had put a distinctively Irish spin on the sector. Internationally, it had popped up to varying degrees of success as a challenger to pay-TV incumbents in the UK, US, Australia and Africa before largely receding from view – though Discovery-owned Setanta Sports Asia is still operational. In its domestic market, however, Setanta had remained a significant player: a respected homegrown subscription outlet in a market where its competition, other than the free-to-air channels, had blown in from across the Irish Sea.

Now, all of a sudden, the Setanta name is gone. In its place is Eir Sport, backed by domestic telecoms leader Eir.

“When the opportunity came to acquire the Setanta business, which was already a great business – a really pioneering, nimble business which specialises not only in content from the UK but specific content from Ireland – it was an opportunity that we had to take,” says Jon Florsheim, the managing director of Eir Consumer, speaking to SportsPro in early September. “Being honest, if we hadn’t taken it, somebody else would have done.”

By Florsheim’s account, although “being a telecoms company we’re not famous for moving swiftly”, Eir was ready to pounce when rumours began to circulate that Setanta co-founder and majority shareholder Mickey O’Rourke was preparing to sell.

“It’s a small country,” he says. “People talk. Mickey is a pretty sociable guy, he’s very friendly with most people, but we just got friendlier than the others, quicker.”

Negotiations began last year and by December, Eir and Setanta had agreed a deal for a reported value of €20 million (US$22 million). By April, regulatory approval had been secured; the newly branded Eir Sport launched on 5th July.

“So the whole timescale was pretty short,” Florsheim says. 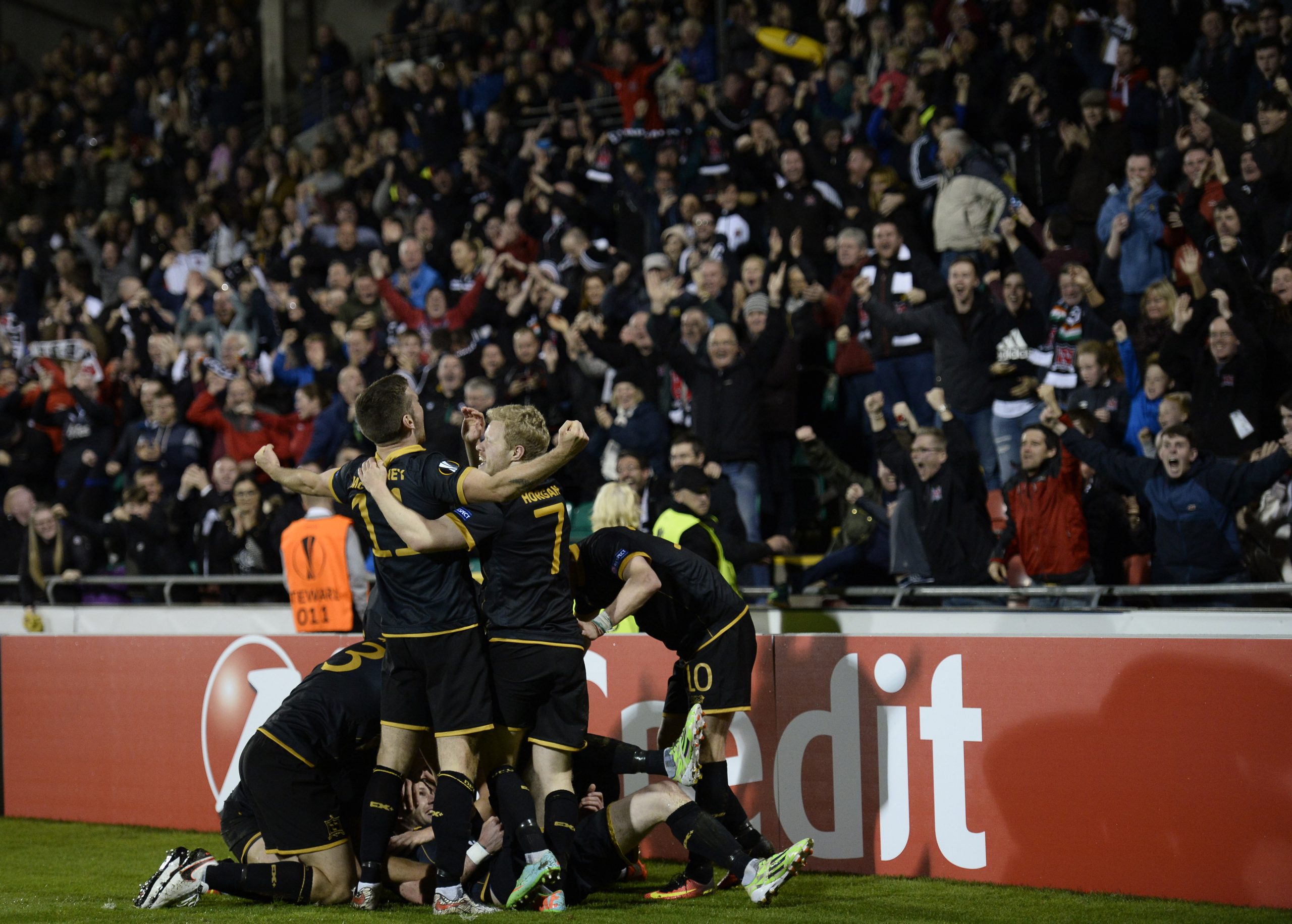 Florsheim is a former executive of Sky in the UK and Luxembourg-based pay-TV media organisation M7 Group, among others. An Englishman, he is married to a Cork woman and has “been coming to Ireland for 25 years”, but only moved to Eir in 2014.

He initially joined as its director of TV and fixed with a responsibility for growing its broadcast platform. Formerly the state fixed-line telecoms monopoly, Eir bought mobile operator Meteor a decade ago and has been continuing its evolution since then, collecting new rivals in a diversifying marketplace.

“Eir have all the ingredients of the great converged communications company but I think having content is the icing on the cake which creates relevance and differentiation,” says Florsheim. “So in terms of timing, in our TV platform we already had the Setanta channels and the BT channels. We had a carriage deal with Setanta, so there was already a relationship there. And look, it was pretty clear that at some point that asset would be grabbed, and we just got there quickest.”

The thinking behind the acquisition was simple: as the fixed-line market in Ireland becomes less significant, relative to broadband and mobile, Eir needs a means of staying ahead of others in overlapping markets.

“It’s all about leveraging our network,” Florsheim says. “We have the mobile network and we’re extending it in terms of the coverage. We have a broadband network and we’re extending the fibre, the BDSL part of it which makes the IPTV and the over the top apps even easier to use. So the technology is moving on apace. I think it’s just down to our imagination in terms of how we leverage that across the content.”

There are elements of the Eir Sport story that will sound familiar to observers of the sports broadcast market, especially in the UK. Florsheim freely acknowledges the parallels between what Eir is trying to achieve and what its British equivalent – telecoms monopoly turned quad-play operator BT – has been doing in the past four years.

BT Sport, in fact, has a shared carriage deal with Eir Sport in Ireland until 2019, a legacy of a previous partnership with Setanta. The agreement sees its channels carried alongside ESPN and Eir Sport 1 and 2.

In assimilating Setanta Sports, Florsheim believes, Eir is starting from a more advanced position than BT. Significant elements of the Setanta Sports operation have been retained by Eir Sport, including key staff.

At the top, O’Rourke has continued as joint chief executive, at least for a couple of years. Brian Quinn, now the operations director at Eir Sport, is also a Setanta Sports veteran.

“I think from a sports TV perspective, it is a tricky market,” Quinn says of the Irish broadcast topography. “It’s unique. I can’t think of another market like it in Europe where there’s a mixture of geography, history, politics. But we’ve a lot of experience in that area.”

Eir’s access to BT Sport content is a significant asset in a hotly contested market. UK pay-TV giant Sky Sports is active in the Republic of Ireland, with some key rights spread across both territories and others attached to country-specific packages. The free-to-air market is also fluid: Liberty Global’s €87 million (US$97 million) takeover of TV3 has given the commercial network new spending power, which it brought to bear by picking up the coveted rights to rugby union’s Six Nations Championship for three years from 2018. The part-publicly funded RTÉ, a cornerstone of the Irish viewing experience for generations, has looked a little less well placed in that environment.

With that in mind, it was important for Eir Sport to make a strong impression on arrival. It did so with an announcement on launch that it had picked up the rights to the 2019 edition of the Rugby World Cup, which TV3 had shown in 2015. The package also included coverage of the 2017 Women’s Rugby World Cup, which will be played in Ireland.

“We moved quickly,” says Florsheim, “because we saw it as a big opportunity when we launched on the 5th of July. We had the Webb Ellis Trophy there to show all the staff and we grabbed the rights. We’ll continue to be nimble and opportunistic going forward now that we’re Eir Sport. We’re not going to lose any of that DNA which has come across from Setanta.”

In sporting terms, Ireland is a distinctive territory. Soccer, naturally, has a high profile, with the Premier League widely watched in general and clubs like Manchester United and Liverpool particularly popular. Rugby union has grown beyond its traditional geographical and economic confines to become a truly national sport, while cricket has made some very early steps on the same path.

The Ultimate Fighting Championship (UFC) has been propelled towards the mainstream by the successes of Dublin’s own Conor McGregor, the world featherweight champion and one of the most charismatic figures in mixed martial arts. UFC coverage is carried on BT Sport. 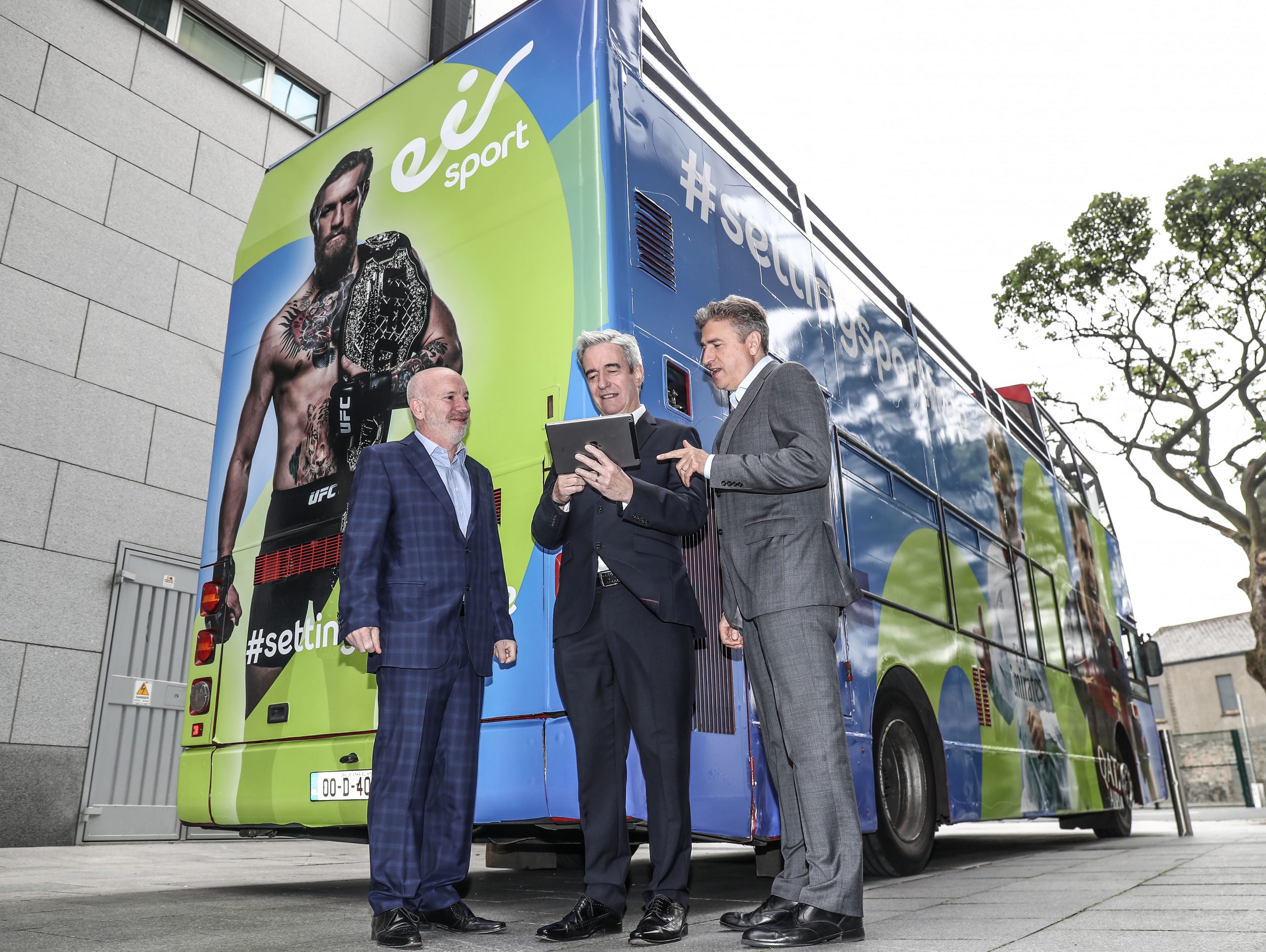 But it is hurling and Gaelic football, and the championships run by the Gaelic Athletic Association (GAA), that really define the culture – particularly at a local level. In July the Eir telecoms brand extended its sponsorship of the GAA All-Ireland Football Championship for five years, and the group would now be very open to an expanded broadcast relationship. Eir Sport currently

has the rights to games from the Allianz National Leagues – less prestigious competitions than the All-Ireland Championships in football and hurling.

RTÉ currently holds most of the rights to the blue-riband coverage in Ireland, while Sky Sports also carries some games and is the lead broadcaster in the UK. A new broadcast arrangement is expected to be finalised this autumn but whatever the outcome of those discussions with the GAA, Florsheim believes that Eir Sport’s positioning as a properly Irish broadcaster can give it an edge in the market.

“We’re very conscious that we only operate in Ireland,” says Florsheim. “We’re not conflicted by any other market. We just specialise in Ireland – that’s our only market; that’s the only market we’re interested in. Again, we can be more nimble and more focused on that content.”

It also allows for tailored promotion of the content already in the company’s hands. Through its partnership with BT Sport, the Eir platform is the Irish home of Uefa club soccer competitions. Tiny Dundalk’s run in the group stages of the Europa League has created a significant marketing opportunity, not least as Eir Sport also airs the League of Ireland.

There is also considerable scope for Eir to execute this kind of activity better than Setanta was ever able to manage on its own.

“Eir has strength on the telecommunications side of things so the technology solutions that they can bring to bear on Eir Sport content is phenomenal and we weren’t particularly strong on that,” notes Quinn. “Already, we’ve just launched an Eir Sport app which is gone into tens of thousands of homes. So it’s an opportunity and it’s something we can build on as well.”

Florsheim cites a recent early example of Eir turning a piece of sporting content to its advantage – taking “ownership”, in Quinn’s words, of a “golden moment”. In his last game for the Irish national soccer team in a 4-0 win over Oman in August, record goalscorer Robbie Keane found the net with one last spectacular effort. A video of the goal was shared widely and rapidly across social networks, even drawing comment from Irish president Michael Higgins.

“It’s something which we can leverage and do it quickly,” Florsheim says. “The incumbent broadcasters probably find it more difficult to do.”

The early advance of Eir Sport has not gone completely unchecked. In July, it was announced that the Virgin Media TV platform – owned, like TV3, by Liberty Global – would not be carrying the new Eir Sport package.

“We offered them very good commercial terms but they decided they wanted to go in a different direction,” says Florsheim. “Without being cheeky, there’s been a reasonable amount of social media comment on that, which you can check for yourself which direction that’s going in. But we just want to make the product as broadly available as possible. It’s disappointing that those Virgin customers are not able to view the product because we’d like them to.”

Quinn echoes that viewpoint. “From Eir Sport’s perspective,” he says, “when we launched the hashtag was #settingsportfree. We want this to be in as many homes as possible for as little as possible and it’s been a positive start in that respect.”

For Florsheim, ultimately, live sport is a means to an end: a way of growing Eir’s customer base “out from the million we’ve got”. The sport service is available free of charge to Eir broadband customers and provides “points of difference” from other options.

“At a sport level, we did ‘mark one’ which was to rebrand as Eir Sport,” says Florsheim. “We did a big marketing campaign, which I think has been successful. We’re into the groove of promoting the fixtures and more tactical opportunities, and I think next is to nail the rights as they come up. We’re not going to commit to what those exactly are going to be, but continue to be nimble and use things like the Rugby World Cup, when they come up, to drive growth.”