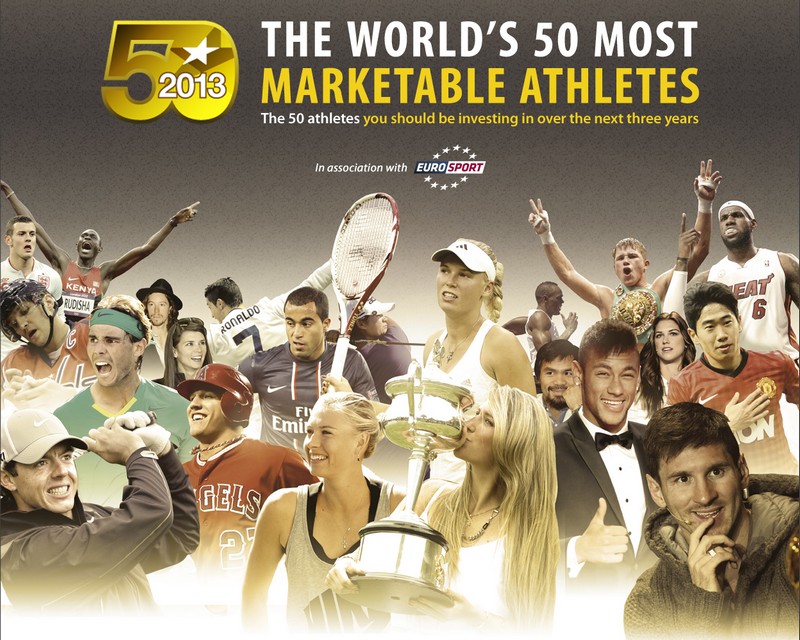 The 50 athletes who appear in the following pages and the order in which they appear will be hotly debated and argued over. That is the one certainty of a list which, since the first edition in 2010, has ranked athletes by their marketing potential over a three-year period. The ranking is not scientific, although much data was used to put it together; it is a subjective rating, based on expert knowledge, extensive counsel from a range of global sources and just a touch of soothsaying. Cases were made for at least 50 other athletes before the final selection was locked in – others could, doubtless, come up with 50 entirely different names.

As in previous years, the central criteria that shaped the list were value for money, age, home market, charisma, willingness to be marketed and crossover appeal. The sporting calendar for the next three years was also closely examined: 2014 throws up, for instance, a winter Olympic Games and a Fifa World Cup, while there are two World Athletics Championships scheduled between now and 2015, by which time the build-up to Rio de Janeiro’s summer Olympics will be in full flow. Four athletes bound for Sochi make the list this year – the likely home hero Alex Ovechkin, ski queen Lindsey Vonn, South Korea’s darling Kim Yu-Na, and action man Shaun White – while the inclusion of American swimmer Missy Franklin for the first time is a reminder that Rio 2016 is beginning to loom on the horizon.

Overall, this year’s list features 19 different sports – or 20 if skateboarding and snowboarding, Shaun White’s disciplines of choice, are counted separately – with eight featuring in the top ten. The list is made up of athletes from 23 countries, with seven different nations in the top ten. There are more women, 14, in the list than ever before and there are 19 new entries in total. 14 athletes have risen from their 2012 ranking, while 16 have dropped. There is one non-mover. 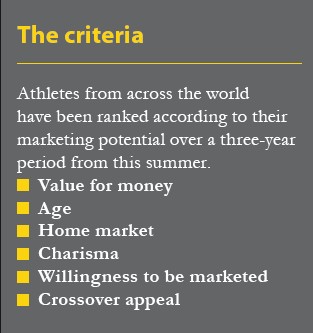 Unsurprisingly, soccer is the most represented sport with nine and a half athletes – the half being the remarkable Ellyse Perry, who has played for Australia in soccer and cricket. There are four Premier League players in the list and two, Cristiano Ronaldo and Lionel Messi, from Spain’s La Liga.

Tennis has more players in the 50 than ever, including five representatives from the Women’s Tennis Association (WTA) Tour – the most of any single league, series or tour. Formula One is represented by three current drivers, half of the six motorsport stars in the list. Five golfers, three men and two women, are included in the 50. Four National Basketball Association (NBA) players appear, while there are two representatives each from athletics, ice hockey and boxing.

Aside from Perry, the only other cricket representative is rising Indian star Virat Kohli. There is one athlete each from American football, swimming, baseball, snowboarding/skateboarding, cycling, skiing and mixed martial arts, as well as the first-ever representatives from ice skating and horse racing. For the first time, meanwhile, a 50 Most Marketable list includes a para-athlete, with Brazilian sprinter Alan Oliveira a new entry on account of his nationality and the rising global profile of Paralympic sport.

Perhaps the most conspicuous omissions on this year’s list are Chinese athletes, following the departure of badminton star Lin Dan. Several were considered, in particular golfers Shanshan Feng (right) and Guan Tianlang and tennis star Li Na. Despite winning a Major last year 23-year old Feng, who plays on the LPGA Tour, was deemed to have less marketing potential than Yani Tseng and Stacy Lewis, the two LPGA players who made the final 50. Despite a remarkable performance at April’s Masters, 14-year old Guan was ultimately deemed too young to make the list – he will likely not even be starting college in three years’ time. Na, meanwhile, missed out when the value for money criteria was applied.

No other Chinese athlete, with the possible Olympics-related exception of hurdler Liu Xiang, has broken through on the global stage since the days of Yao Ming. Within basketball itself, a huge sport in China, it is now LeBron James and his NBA colleagues who dominate in the country rather than local stars. Indeed, although there is no Chinese national in the list, the country’s influence can still be seen on the 50: the likes of Tiger Woods and the soccer players in the list are all huge stars in China, where the appetite for western sports is vast. Outside China, meanwhile, Asia is represented by athletes from Taiwan, the Philippines, Japan and South Korea.

Another factor keenly debated as this year’s list was assembled was the extent to which team sports affect marketing potential. For several years, this list has not included any Spanish soccer players, a result of our belief that the Spain national team brand outstrips the stars that comprise it, in marketing terms at least. The German national soccer team has fallen into the same category this year. Several German soccer players were considered, including Mario Götze, Manuel Neuer and Mezut Özil, but it is the strength of the national brand that shines brightest just now in one of Europe’s mega-markets.

Perhaps more than any previous list, this has proved to be the year of the individual sports. There is, to cite but one example, only a single representative from the richest league on the planet, the National Football League (NFL), in the shape of Washington Redskins’ quarterback Robert Griffin III. This is perhaps a legacy of the past season’s Super Bowl not being dominated by a one-man team and the lack of quarterbacks, still by some distance the NFL’s most marketing-friendly position, at the top of this year’s draft.

The way basketball allows individual characters to shine on and off-court has been well documented in previous versions of this list and tennis and golf players are fixtures in the rankings, too, but there is a new marketability category evident on the 2013 list too: the sporting power couple. Four athletes on this list have formed two highly marketable pairings – Woods and Vonn having recently joined Rory McIlroy and Caroline Wozniacki – while at least two others in our 50 are enjoying highprofile relationships with other athletes – Alex Ovechkin with tennis star Maria Kirilenko and Danica Patrick with fellow Nascar driver Ricky Stenhouse Jr. The celebrity profile such relationships bring is another intriguing element of the marketing mix that makes this list tick.