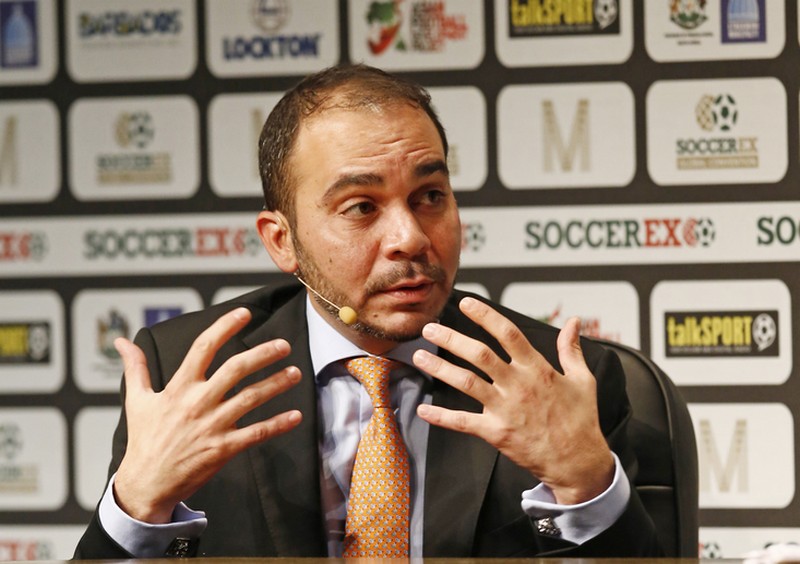 Fifa vice president Prince Ali Bin Al Hussein declared his intention to stand for the presidency of world soccer's governing body on Tuesday, insisting that the “headlines should be about football, the beautiful sport, not about Fifa”.

The president of the Jordan Football Association and West Asian Football Federation is the third candidate to officially declare ahead of the January 29th deadline for nominations, following Frenchman Jerome Champagne who is considered the outsider.

Incumbent Sepp Blatter confirmed in September he will stand for what would be a fifth term in world soccer's most powerful role. The 78-year-old remains the heavy favourite to retain his post.

38-year-old Prince Ali, announcing his intentions on Tuesday, said: “The message I heard, over and over, was that it is time for a change.

He added: “The world game deserves a world-class governing body – an international federation that is a service organisation and a model of ethics, transparency and good governance.

“Fifa exists to serve a sport which unites billions of people from all over the world, people of differing and divergent political, religious and social affiliations, who come together in their enjoyment of 'the world's game'.”

Prince Ali is believed to have support from Uefa, European soccer's governing body which has been seeking a credible candidate to stand against Blatter. However, support from his home confederation, Asia, may not be a given.

Salman Bin Ibrahim Al-Khalifa, the president of the Asian Football Confederation, is believed to be a supporter of Blatter, who, despite courting much controversy, has done much during his tenure to aid the development of soccer in smaller nations, solidifying his powerbase in the process.

Prince Ali, who has been in charge of the Jordan FA since 1999, did not reveal who will nominate him to stand in June's presidential election. He requires nominations from five of Fifa's 209 members.

“This wasn't an easy decision,” Prince Ali continued. “It came after careful consideration and many discussions with respected Fifa colleagues over the last few months.”

In a wide-ranging interview published last year in SoccerexPro, the quarterly soccer business magazine published by SportsPro, Prince Ali outlined why he had been drawn to the world of soccer administration and offered an insight into his working style. “I like things to be institutionalised,” he said, “and to be done properly, give credit where it's due and so on – not politics, just for the game, for everyone and others and that's it.”

Of his experience within Fifa he added: “In the beginning I was a bit naive, I didn't understand some of the complexities but I think that, I feel I've slowly earned the respect of everyone within the executive committee. I'm going to try my best. All I care about is the sport and not the politics. I'm not there to show myself or have a position, I'm all about the work.

“And it's a fascinating organisation. Fifa has more members than the United Nations, and just learning how to help and promote the youth is all I care about. I have two kids and I want them to benefit, and I want kids all over the world to benefit, from the most popular and important sport in the world.”