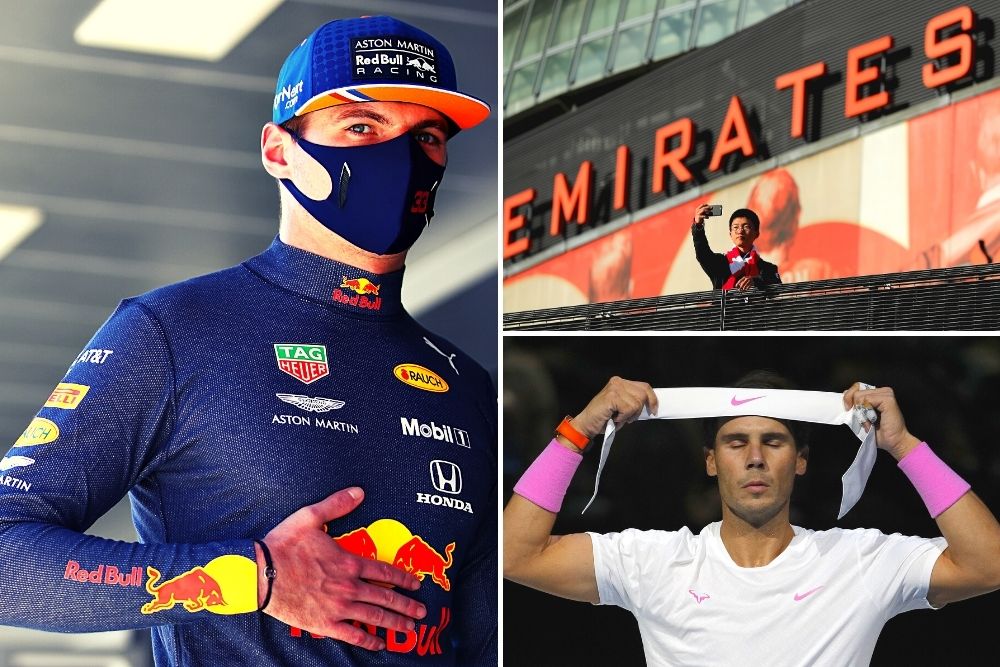 For every professional sport and the athletes that make a career of competing at the highest level, choosing which brands to partner is key to both sustaining their financial stability and building a legacy among a global audience.

Traditionally, a sponsor has also presented rights holders with a tangible asset in return for exposure to their loyal fanbase. With the luxury of time, sporting icons and their long-term partners often become inextricably linked.

However, in the age of social and digital media, brands have been presented with an opportunity to expand their reach – and their value in turn – with online engagement playing a key role in generating revenues, in addition to their in-stadia and kit sponsorship exposure. Nowadays, direct-to-consumer (DTC) content plays a pivotal role in brand exposure and also offers up innovative ways in which they and their partners are able to market themselves online – by engaging core and peripheral audiences more regularly.

For the first time, this level of performance among some of sport’s biggest brand partners has been quantified and collated into a list of the World’s 50 Most Marketed Brands in sport. Using data gathered by spontech specialist Hookit, SportsPro’s inaugural rankings show Nike to be the clear frontrunner from a list dominated by apparel and automotive brands.

That Nike comes out on top is perhaps no surprise given few brands can match the Oregon, USA-based sportswear giant for sports marketing spend; a company whose partnership portfolio reads like a who’s who of the industry.

As part of the ranking process, which drew on all social and digital posts from professional athletes, teams and leagues over the course of 12 months, Hookit found that Nike leads the way on numerous fronts. With 11,988 total sports partnerships, the most social posts about the brand from those partners, and more than 5.5 billion engagements across those posts, Nike received more than US$461.9 million in total value.

All told, over 25,000 sports organisations and athletes posted between 1st August 2019 and 1st August 2020, promoting more than 7,000 brands across platforms including Facebook, Instagram, TikTok, Twitch, Twitter, VK, Weibo and YouTube. Overall, Nike accrued more than twice the value of any other brand, amounting to 20 times more value than was received by sportswear rival Reebok, which ranked in 50th place.

When one of us wins, we both win. You can't stop sisters. #YouCantStopUs

According to Hookit’s data, the 50 Most Marketed Brands received more than US$3 billion in combined sponsorship value via social media. Incredibly, that figure represents 49 per cent of the total value generated by all brands with a presence in sport.

Like Nike, second-placed Emirates Airline and third-placed Adidas are boosted by their associations with major leagues and teams, and both feature heavily in posts by elite soccer players. Many of the planet’s top sportsmen and women featured in SportsPro's latest 50 Most Marketable Athletes list have personal endorsement deals with either Nike or Adidas away from their individual clubs.

The crossover between athlete endorsement deals and club sponsorships invariably leads to unintended promotion for rival brands. For example, this year’s most marketable athlete, Lionel Messi, has endorsed Adidas since 2006 but he has also brought its main rival a great deal of exposure and value via every post shared of him in Barcelona's Nike branded kit.

Likewise, this year’s second most marketable athlete, Cristiano Ronaldo, has long been associated with Nike, but he continues to garner Adidas indirect exposure by way of his employment at Juventus, which has a lucrative kit deal with the German apparel giant.

Hookit’s data reveals a unique trend among list’s top 20 brands: with the exception of US insurer State Farm, which ranks sixth, the other 19 all have a presence in either soccer or motorsport, or both.

Of those that have a presence in both, Dutch beer brand Heineken has made a concerted effort to increase its digital presence across its Uefa Champions League and Formula One partnerships, whose post-lockdown returns to without fans earlier presented the brand with an opportunity to engage fans in a different way.

“In regards to the Champions League, the reality is that 72 per cent of the fans watch it home alone. This was already happening [before the pandemic] and, while you were watching it at home, you were on social and you were discussing with friends what they thought of the game.

“We know that the digital conversation has been going on and that it has only been amplified over the past few months. It’s the brand’s role to make sure that we are part of that conversation.”

Another race weekend at Silverstone is coming up – and the @Heineken F1 Fan Cam is back!

Send us a video of you cheering on your favourite drivers and teams, and you could appear on a giant screen trackside ��

While Nike and Adidas are the preeminent apparel suppliers in soccer, Emirates is also prominent across the sport thanks to front-of-shirt sponsorship deals with multiple teams, including English top-flight club Arsenal, who have had a title sponsorship deal with the airline for their 60,260-capacity Emirates Stadium since its opened in 2006. Whilst that that may be Emirates' best-known sports partnership it is also a top tier sponsor of Formula One, among a host of other properties.

According to Hookit’s findings, Emirates pips Adidas in the rankings by value received (US$252.2 million versus US$227.9 million), though the company has achieved notably fewer engagements than the sportswear brand (1.78 billion versus 2.24 billion) across far fewer partnerships (2,019 versus 6,542).

Elsewhere, both Beko, which ranks tenth on the list and appears on Barcelona’s shirts sleeves and training kit, and also Standard Chartered, which ranks eighth and whose lucrative UK£160 million (US$214 million) shirt sponsorship deal with Premier League champions Liverpool began in May 2018, average more than US$10,000 per social post. By contrast, four brands on the list averaged less than US$1,000 per post: automotive manufacturers Toyota, Audi, and Ford, and sports apparel company Under Armour.

The data also shows how the number of partnerships an individual brand invests in directly correlates with the value received. For example, the Nike brand has featured in 72 times more posts than that of gambling firm Bet365, which – while ranked 39th, with more than US$31.7 million in sponsorship value received – has only 323 partner ambassadors and promoters.

In 30th position, energy firm Repsol, which owns naming rights to the Repsol Honda MotoGP team, has the fewest promoters, totalling 204. Meanwhile, every other brand on the list had at least 320 promoters, while German sportswear company Puma, beer manufacturer Anheuser-Busch InBev, and Red Bull are the only brands other than Nike and Adidas to hold 3,000 or more partnerships. 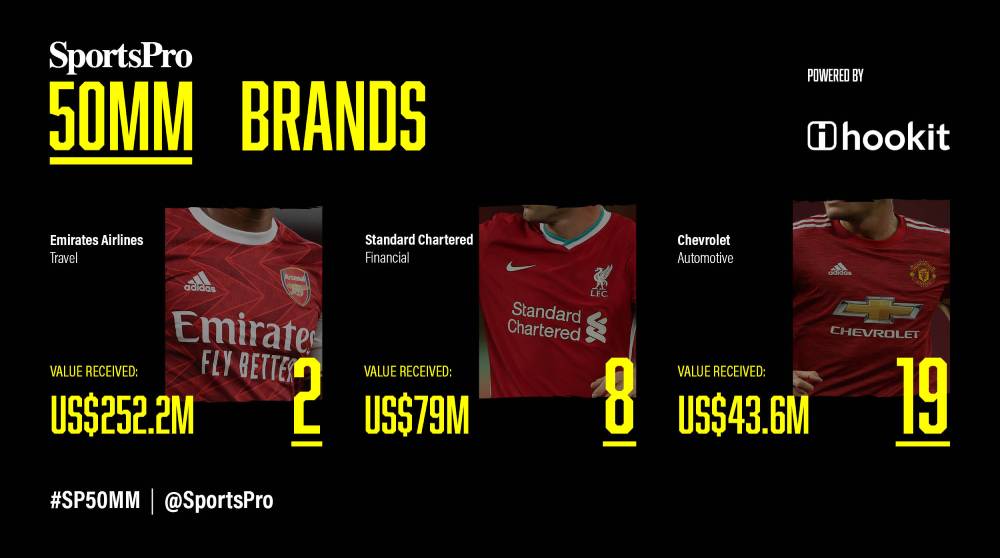 According to Rahul Kadavakolu, Rakuten’s director of global marketing, the impact the coronavirus pandemic has had on the sports industry could alter the way in which sports and their sponsors draw up contracts in the future, placing greater emphasis on how they can extract value by engaging fans via their combined digital assets.

“We moved to using digital platforms very effectively as soon as we knew that sport was going to be going away for some time,” Kadavakolu told SportsPro. “A lot of the staff were going to start working from home, establishing those processes, not only in our company, but also the peers we work with on the partnerships side.

“At Rakuten we’ve always been ahead of the learning curve as far as technology is concerned. We’re connected globally to pretty much all our offices and connect our employees around the world using the best in class technology. So as far as our partnerships are concerned, we moved to our digital platforms very effectively.”

Several major telecommunications companies also feature on the list. They include AT&T, T-Mobile, and Vodafone – which hold high profile partnerships across the US major leagues and European sport, and are ranked 27th, 34th and 42nd respectively. However, there is more opportunity for growth within the sports sphere among telecommunication companies specifically, especially as the rollout of the next generation 5G mobile network gathers pace over the next few years.

Among those tech-based companies omitted, US telecommunication brand Verizon and technology giant Microsoft do not feature in the list despite each spending at least US$75 million in sponsorship, according to data from IEG. This is likely due, at least in part, to the nature of their sports partnerships, which position them as service providers to front-office departments rather than prominent sponsors of more public-facing assets like club stadia and jerseys.

From Amsterdam to Tokyo to Los Angeles. We've been there for some of the most iconic @Olympics moments, and we can't wait to see what's next. pic.twitter.com/wUojXNaGDU

Who else is on the bench?

There are also a few other surprise omissions to emerge from Hookit’s data, including several top spenders. For example, of the International Olympic Committee’s (IOC) TOP sponsors, each of whom pay hundreds of millions of dollars for a global association with the Games, only two made the top 50 – Japanese automotive manufacturer Toyota (ranked 15th) and drinks giant Coca-Cola (ranked 22nd).

Both of those companies have more than 2,000 sports partnerships, but like all Olympic sponsors, they do not receive overt branding during the Games. Partnerships with the IOC are more geared towards establishing B2B relationships or activations rather than getting airtime for a logo.

As part of the IOC’s production of more digital content, however, the Olympics is well positioned to market its TOP partners via those assets, while being affiliated with the world’s largest sporting spectacle – and its ability to attract billions of viewers – is likely to increase a brand’s overall sentiment among fans.

Among the financial institutions not to feature in the list, Bank of America’s omission is perhaps the standout, especially considering that it also spends north of US$75 million in sports sponsorships. Its deals include the naming rights to the National Football League's (NFL) Carolina Panthers stadium in Charlotte, which will also become house Major League Soccer (MLS) expansion franchise, Charlotte FC, when the team joins the league in 2022.

The bank’s absence is made all the more stark considering several banking firms feature in the top ten most marketed brands. They include State Farm, which holds venue naming rights deals in the NFL and NBA, Liverpool’s shirt sponsor Standard Chartered, and also La Liga’s title sponsor Santander, which ranks seventh.

Elsewhere, another noticeable exclusion is US technology and ecommerce giant Amazon, which, like Rakuten, holds broadcast rights to elite sport via its own streaming service, Prime Video, but has only recently begun to show interest in sponsoring sports properties in the traditional manner.

Earlier this year, Amazon secured naming rights to a new 18,100-seat redevelopment of Seattle’s KeyArena, though has not elected to use its own branding as part of its title sponsorship. The venue, which will become home to the National Hockey League’s (NHL) Seattle Kraken and Women’s National Basketball League’s (WNBA) Seattle Storm, will instead be called Climate Pledge Arena as part of Amazon’s bid to promote its environmental sustainability campaign.

This kind of deal, perhaps the biggest in terms of a major company choosing to promote its social responsibility activity rather its own brand, is the latest example of how partnerships are changing to serve sport in unconventional ways.

To view the full list of the World’s 50 Most Marketed Brands powered by Hookit, head over to SportsPro’s dedicated 50MM content hub and join in the conversation on social media using the hashtag #SP50MM.