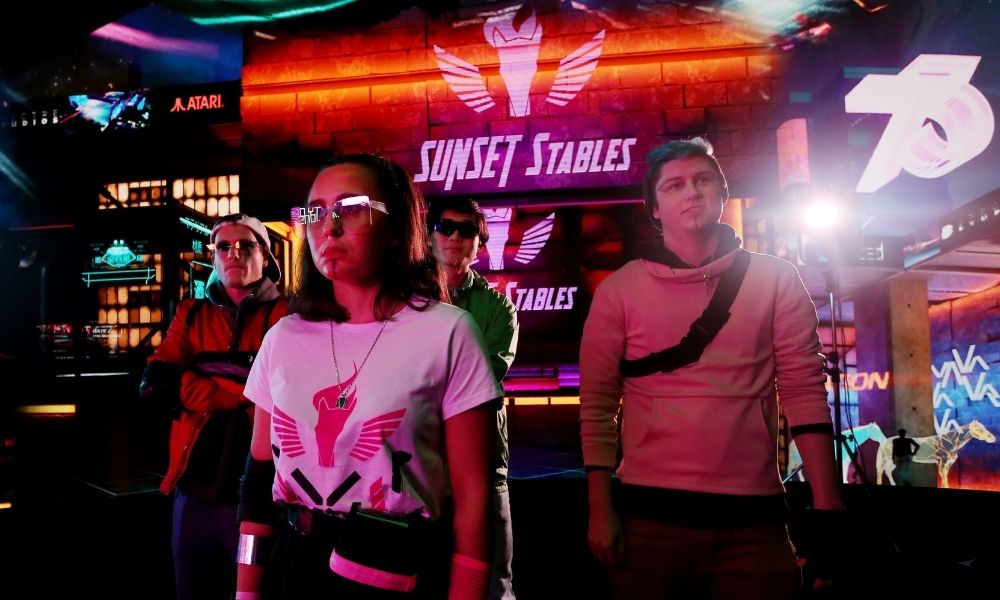 It probably says something about the state of things in our world when so many of its richest people would rather be somewhere else.

First came the race between Virgin’s Richard Branson and Amazon’s Jeff Bezos, setting their hard-earned tax breaks alight and blasting off to the edge of space – the edge of space, admittedly, at our end. No sooner had anyone had chance to ask where their money might have been better spent than they were back. Branson was extolling the time-expanding potential of private space flight. Bezos refuelled his crusade for a “much grander human destiny” of saving the planet by moving all its stuff, and all its staff, somewhere else.

If that approach to problem-solving feels a little too ‘Marvel supervillain in act one’ then other visions of the future are available – albeit not that distinct in character, come to think of it. Mark Zuckerberg, for one, takes a different view. The Facebook founder, fair to say, has some difficult issues to contend with when it comes to his company’s effect on reality, from the tides of disinformation on its media platforms to the difficulty of wiping out personal and prejudiced abuse. Nevertheless, he also has his mind set on another plane of existence altogether.

It might, in time, be one that the sports industry has to operate in as well.

Speaking to employees at the end of June, and then on an earnings call in July, Zuckerberg said he no longer thought of Facebook – which also owns WhatsApp and Instagram – as a social media company. Instead, he argues, it should be considered “a metaverse company”.

“What,” you might ask, “is the metaverse?” Judging by the number of explainers popping up on news sites in the past few weeks, you would not be the first.

The term metaverse, it says here, originates in its current form in a dystopian 1992 science fiction novel, Snow Crash. The simplest way of understanding it is as a shared virtual space. But that is too limited a definition for many of its proponents. Venture capitalist Matthew Ball, who in January 2020 wrote a widely read essay called ‘The Metaverse: What It Is, Where to Find it, Who Will Build It, and Fortnite’, says the most helpful way of framing it is as a “successor state to the internet”.

Facebook has taken to positioning its products as metaverse-ready. The latest of these is its new remote office software, Horizon Workrooms, which basically takes video calls into virtual reality (VR), giving every user a cartoonish avatar to illustrate Zuckerberg’s idea of the metaverse as “an embodied internet”.

Facebook’s persistence with VR in spite of long-term consumer scepticism is fascinating in its own right. It might be read as the result of some big bet it made on the technology by, say, buying a startup for US$2 billion in 2014 and then investing a few times that amount in research and development. Either way, the full Workrooms experience can be accessed by buying one of Facebook’s Oculus Quest 2 headsets.

The infrastructure for a ‘true metaverse’, to go back to Ball’s take on it, does not yet exist, but a series of core principles for what it would look like are being settled.

It would ‘be persistent’, never resetting or pausing; be ‘synchronous and live’, working in real time at the same time for everyone; have no cap on concurrent users and give all users a sense of ‘presence’; be ‘a fully functioning economy’; be ‘an experience that spans the physical and digital worlds’; have ‘unprecedented interoperability of data, digital items/assets, [and] content’; and ‘be populated by “content” and “experiences” created and operated by an incredibly wide range of [independent and corporate] contributors’.

You may be reaching at this point for the red pill, the blue pill, or an aspirin. But whatever the semantic debates over what the thing is, Ball also believes that its ‘pieces have started to feel very real’ – thanks in no small part to video games like Fortnite and Roblox, with their in-world events and economies. Above all, it is informing some pretty high-level strategic decision-making. It is, as Ball puts it: ‘the newest macro-goal for many of the world’s tech giants’.

Sport probably has a little while to wait before it is consumed by the metaverse. Already, though, it is part of economies that feel a little like prototypes, where convergence is creating new opportunities but will also soon prompt some big decisions.

One of these is the ‘direct to avatar’ or D2A market, where consumers buy products with real money that can only be used by their avatars in a virtual environment. That might be a digital-only piece of high fashion for Instagram, or a victory dance in Fortnite. Or it might be an Adidas-branded, digital-only soccer shirt or pair of boots in EA Sports’ Fifa video game series.

In a metaverse, users could buy D2A items and carry them from one virtual setting to another. That is what Ball means by ‘unprecedented interoperability’ and it would change the way intellectual property is used in digital spaces. For sports teams, that is an interesting prospect: a shirt or cap or any other bit of coded merch could be worn by a user across every game, event or social activity they participate in.

The products that most closely resemble that right now are probably non-fungible token (NFTs), which you might remember from such apparent gold rushes as the one earlier this year. For now, NFTs are mostly being investigated by rights holders, teams and athletes as an extension of the collectibles market, making new money from existing materials. Trading NFTs is only possible, for now, using another much-discussed blockchain-enabled technology, cryptocurrency.

Their ongoing ethical and environmental shortcomings notwithstanding, NFTs and cryptocurrency have intriguing implications for online world-building that are only just becoming apparent. Developed by Australia’s Virtually Human Studios, Zed Run (pictured above) describes itself as a ‘a provably fair digital horse racing game built on blockchain technology’. Users can buy, breed, race and sell NFTs of racehorse avatars, trading in Ethereum cryptocurrency with the potential to make quite real profits and losses.

Brands like Stella Artois, Atari and Nascar have already created partnerships within the game and it would not take much to envisage an NFT-based model being reapplied to other sports, like versions of daily fantasy games or coaching sims. That could be something that happened on its own platform or within the worlds of existing networks and games – or both.

Of course, the most powerful consequences could be years off, if they appear at all. Still, it is all an incentive for sports bodies and their partners to think about what all this convergence is going to mean for them. On a purely commercial level, there is the recent report by the Athletic that the National Football League (NFL) has gone into its new season asking member franchises not to sign deals with cryptocurrency and NFT partners. Perhaps that buys time for a smoothing of that market’s public reputation but, more likely, it means that the league avoids piecemeal competition with its teams in a space whose long-term influence is hard to quantify.

More broadly, the sports industry is still grappling with the viability of its fundamental media and sponsorship rights models, and looking for other ways to extract an income from its IP and its networks. Rarefied thought experiments could be a distraction from that, or help mark out where to look on the horizon. But they are also a reminder to consider everything in the round and not just the parts that pay best right now.

Sport has become a content-first marketplace in the last couple of generations but the emergence of new technologies already means those parts of it with the most positive societal impact – physical activity and fan communities – can be re-evaluated in more interconnected digital environments.

Really, though, the sports business needs to be considering these things on their own terms. Any world humans make will have their imprint on it; there are no perfect ones to be found online or at the end of rocket trips. Things can still be made better in this one. Whatever else lies out there, the real work happens here.